What is AQ DONUTS II ?

For driving connoisseurs with a passion for performance, there is a new tire technology setting new standards for handling, grip, and comfort. The “AQ Donuts II” technology was evoluted from “AQ Donuts” which enhanced the fundamental “DONUTS” technology with more consistent performance as tire wear. 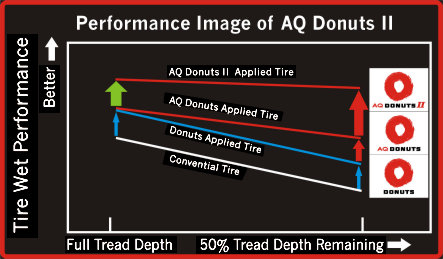 The result is a technology that largely improve all basic performance, and prevent performance loss.

The skin of shark under mircoscope was formed by tiny riblets (Hydro Evacuation Surface). It is the nature’s gift to the fittest predatory of the sea. It allows shark to slide smoothly under water to overtake its prey.

This phenomenon was first recognised and adopted by N.A.S.A. Nowsday it is widely used by swimmers of Olypmic Game in their swimming trunk.

Applying hydro evacuation surface to tire grooves can reduce water turbulence for water flows. It promotes the smooth drainage of water and thereby helps prevent hydroplaning on the wet road.

Enhances GUTT tire design for better contact with the road surface while in motion, and produces an even smoother and quieter ride. 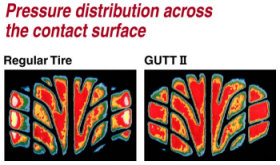 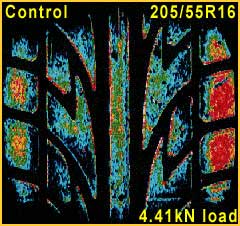 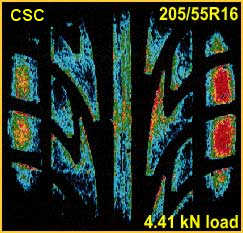 Reduction of pressure-concentration at block edge.

In addition to using new convex shape of O-Bead, by significantly increasing the torsional or twisting stiffness of the bead coil, a more uniform contact patch is realized especially when cornering, improving maneuverability and stability.

O-BEAD, with its new convex shape, enhances the performance of the tire, through an even fit between the tire bead and wheel rim.

An improved tread block design which varies the angle of the block edges in accordance with their size. This technology was often applied together with the previous AQ Donuts technology ( e.g. in Grid II, RE711, S02). With more even block stiffness, more uniform contact pressure can be acheived as the tyre rotates, resulting in a smoother ride.

L.L.Carbon was first developed in the Donuts technology, i.e. linking carbon in a chain, to stablise the rubber, increase wear resistance and helping to reduce chipping, cracking and tearing.

Now by improving the construction of carbon to polymer bonding inside the L.L.Carbon, the high wear resistance of the L.L.Carbon were futher improved.

This a combination of technology to reduce rubber hardening after wearing and heating up. Three methods are used to suppress the aging effect on rubber.

Rubber contains oil , which tends to migrate to the under-tread/casing during a tires life. The surface which loses oil, becauses harder. Bridgestone has replaced partly the oil with a substance that comprises larger molecules which migrate less easily through the rubber.

Polymer chain scission after use due to heat and strain caused by friction and deformation when tire is in motion. Then re-polymerization occurs increasing the rubber hardness and the wet performance will deteriorate. By using link stabilizing agent to prevent re-polymering, rubber will not harden and so maintain the wet performance.

In AQ Donuts II, higher-grip and softer compound (i.e. higher content of new particle-Z) is already exposed in the center of the tire when new, and gradually more is exposed from the center outward as tire wear. Hence, wet performance of tire is not only improved when used, but also when new.

(To explain clearly, the base rubber is shown in red, but the color of actual tires does not change)

Thank you for your registration.

It has been sent successfully. You will also receive a copy in your email.